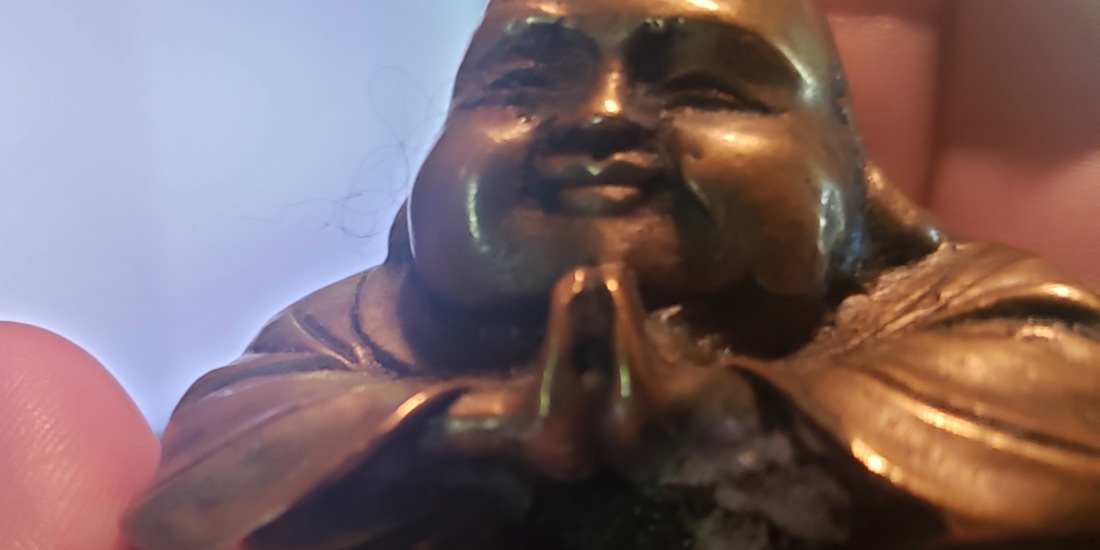 Learning to meditate has not been what I expected it to be when I started. I once meditated for over a year every day, even when I had bronchitis and was really sick. I sat for 1.5 minutes one of those sick days because I was just too sick to keep going, but I sat. That was the point. Just do it.

One time I talked to my meditation instructor (MI) because I had to travel for work and was being expected to share a room with an employee. The men on the trip got private rooms while the women had to double up, so that was a problem in and of itself. In retrospect that corporate mysogyny was the bigger problem, but I approached my MI about my other concern. I was in the middle of my self-imposed year of meditation, and wanted to be able to meditate in my room during this trip without being bothered by a pesky employee. Could I beg a religious accommodation?

He said, “You can meditate where ever you are.” Damn him. As I recall I went on the trip and shared the room and lived, but it still makes me really crabby. (Meditation does not preclude crabbiness, it turns out.) I actually did tell my boss that I would prefer not to share a room due to my meditation practice. She said the company couldn’t afford it. She, a Vice President, was sharing a room with a manager. There is surely a whole separate blog piece in that, isn’t there? (There will be. I just put it on my list.)

That year Richard and I traveled to Ecuador and visited several different cities. I took my little silver Buddha that fits in my hand with me and sat it on a window ledge wherever we were while my husband napped. I have vivid memories of our hotel in Quito. We were there for several nights. Outside our window was a construction site. The point of meditating is not to have a good view, it’s to sit with whatever is happening. They had dug down deep into the ground, maybe the equivalent of 3 above-ground stories. I believe we were on the 5th floor, perhaps higher, of a very modern Finnish-owned hotel with well-appointed but tiny room.  Tiny, distant, ant-sized men climbed around on the clay walls of the hole, installing pipes and cables, and other guys dug things up with excavators that I had seen lowered into the hole by a crane. There were ladders and scaffolds on the walls. I watched these men work as I meditated, unless it was raining. When that happened I watched puddles form in the hole.

The view was much better in Manta. It overlooked the ocean, and there were thousands of people packed on the beach. It was a holiday. Mardi Gras. They don’t celebrate Mardi Gras the way I am used to. They shut down shops and go to the beach.

One day I was sitting on our little balcony in Manta with my little Buddha on the little table overlooking the throngs on the beach while RIchard napped. The ocean was truly beautiful, but I am not a fan of throngs. I had no desire to enter this one. Watching during my meditation, the bodies shifted around like a kaleidoscope , becoming dense here, and clearing out to bare sand there, then shifting again, a cluster of blue, a cluster of pink, a collage of every color. As I watched, my stress over the crowded bodies touching each other (long before Covid-19) began to lift. A group of people began tossing a ball, and a clearing opened up around them as different people hit the ball back and forth.

After a little while the game wound down but the opening in the sand stayed broad for a time. A toddler in a red tee-shirt and a diaper trotted into the center. He darted this way and that way. He threw his hands into the air then bent forward, mouth open. I was so far away he was tiny to me, but he was clearly anguished. If the beach were not so crowded I might have been able to help him despite the distance, but instead of screeching and rushing out the door as I might have done a year earlier, I stayed in meditation and watched.  Don’t get me wrong. I would have done something—anything necessary, But running outside into the mass wasn’t going to help anyone. I needed to map things out, both physically and mentally. The child rushed up to a couple of different people, until a man in a long-sleeved white shirt approached him, knelt to his level. He stood, took the little guy’s hand and they walked from group to group of people. One group of people pointed in a certain direction. Just as they did, a woman and a couple of older children rushed forward and he fell into their arms. The Mom wiped his face with her hand, picked him up, and they wandered down the beach, away from the crowds, to the edge of the ocean and out of my view.

I finished my meditation while my husband slept and the reunited family went home, whole.

That is what meditation does for you. It lets you learn to notice. It helps you decide when to act. It takes your knee-jerk reactions and emotions out of the driver’s seat.